Chris Stewart has been spinning tunes at parties for over 25 years!

“It all started when my brother brought home various records in the mid 70’s…” says Chris, “.. and I saw a need to add a second turntable to our stereo, so that the music would be played non-stop. I didn’t like to have to flip an album over or put on another one, because there would be dead air, a few moments of silence. So with my paper route money, I bought a disco mixer and started having the best parties. I always seemed to know what music to play, how to feel the crowd, and work the whole event!”

This passion for music and entertaining soon grew into a full time business, when in the early 80’s, Chris teamed up with another College Graduate to form a professional mobile disc jockey service called “Sound Decision”. They concentrated their core business towards the High School and College/University crowd by offering one of the largest sound and light shows available at the time. By 1985, they bought out a reputable competitor called Lighthouse and effectively quadrupled their business overnight.

An opportunity became available to buy out his partner in 1988, and Chris started working the Corporate and Wedding markets extensively. “I saw that there was a lack of DJ talent in a field that was predominately marketed by bands” says Chris.

About this time Chris joined the CDJA (The Canadian Disc Jockey Association”. A “Not For Profit” organization that promotes disc jockey professionalism to the consumer, and maintains standards of excellence throughtout the industry. “This really allowed me to achieve my goals through networking, training, support and education. Taking Interactive Performance seminars, improving my presentation workshops, and basically learning all that I could to further my career. It’s about reading the crowd, enjoying your work, and being interactive with everyone.” Chris also helped open the C.D.J.A. Durham Region Chapter and served as Vice President for four years.

In the Mid 90’s the Internet explosion allowed Chris to market his services through his World Wide Web Site lighthousedj.com. “It was like a flood gate opening” as his web site was visited time and again and his business grew further. This allowed Chris to start expanding his services by hiring a team of DJ’s to better handle the needs of his clients.

“Various packages are made available depending on the size, theme and budget of the function..” says Chris, “lighting, special effects and music all combined to make your event a success.” A consultation with his clients to further meet their needs is always included. 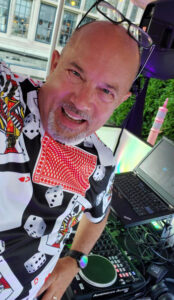 Chris has become one of the most sought after performers at corporate events, weddings, anniversaries, Bar and Bat Mitzvahs and parties in general because of his attention to detail, his love of music, his energy and enthusiasm at the function, and most importantly, because he wants to see everybody having a great time! With his huge collection of over 20,000 song titles on CD, he is often heard to say “Yes, I play requests, that’s what makes this work so rewarding, every show is different based on which direction the music takes us.”

Today Chris lives with his wife and two boys in Ajax and is busier than ever dividing his time between raising his family and entertaining the masses.