A.J. Stewart has had a life-long passion for music; starting with the seeds of his first vinyl record collection as a teenager in the 70’s, branching out into mix-tapes and later into CDs.

He was instrumental in assisting University of Toronto Community Radio in obtaining an FM license back in the mid-1980’s, and getting them on the air as CIUT-89.5 (as the first Assistant Music Director). He did a weekly midnight show plus an ongoing series on the music of various artists, both popular and obscure. 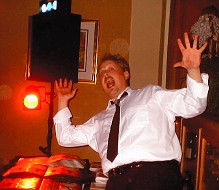 Alex started DJ’ing with Lighthouse in the mid 90’s with his brother Chris (the owner/operator) and has been well received by all clientele , able to perform to all ages.

He knows that the right mix of music is important to the success of the function and very few things in life give him greater satisfaction than taking requests and ensuring everybody has a great time.